10 Forgotten Female Pioneers of the Bauhaus

The male icons of the early-20th-century Bauhaus school, like Josef Albers,László Moholy-Nagy, and Paul Klee, are some of the most celebrated pioneers of modern art. But the women artists who taught, studied, and made groundbreaking work with them are often remembered in history books as wives of their male counterparts or, worse, not at all.

While women were allowed into the German school—and its manifesto stated that it welcomed “any person of good repute, without regard to age or sex”—a strong gender bias still informed its structure. Female students, for instance, were encouraged to pursue weaving rather than male-dominated mediums like painting, carving, and architecture. Bauhaus founder Walter Gropius encouraged this distinction through his vocal belief that men thought in three dimensions, while women could only handle two.

The year 2019 will mark the 100th birthday of the Bauhaus. As that date approaches, this bias toward the school’s male students is being revised, and its many integral female members recognized by scholarship and institutional exhibitions. Weavers, industrial designers, photographers, and architects like Anni Albers, Marianne Brandt, and Gertrud Arndt not only advanced the school’s historic marriage of art and function; they were also essential in laying the groundwork for centuries of art and design innovation to come after them.

Below, we highlight 10 female Bauhaus members who contributed fundamental work, instruction, and innovation to the school over the course of its relatively short existence, between 1919 and 1933, and bolstered its lasting legacy.

Albers arrived at the Bauhaus in 1922, with the hope of continuing the painting studies that she had begun at the School of Arts and Crafts in Hamburg. By 1923, however, she was spending most of her time in the school’s weaving workshop, where she became a quick master of the loom. Influenced by Paul Klee and “what he did with a line, a point or a stroke of the paintbrush,” Albers used weaving to develop a signature visual vocabulary of hard-edged patterns. Her early tapestries would go on to have a considerable impact on the development of geometric abstraction in the visual arts, along with the work of several of her Bauhaus peers, including her husband, Josef Albers, who she met at the school.

Albers explored the functional possibilities of textiles with focus and passion; in 1930, she designed a cotton and cellophane curtain that simultaneously absorbed sound and reflected light. In 1931, she was appointed to helm the weaving workshop and became one of the first women at the Bauhaus to assume a leadership role. Several years after immigrating to the U.S. in 1933, she began to teach at the influentialBlack Mountain College in North Carolina. Albers became famous for the fabrics she crafted for large-scale companies like Knoll. She was also the first female textile artist to have a solo exhibition at the Museum of Modern Art in New York, in 1949.

Brandt’s early work so impressed László Moholy-Nagy that, in 1924, he opened a space for her in the metal workshop, a discipline that women had previously been barred from. She went on to design some of the most iconic works associated with the Bauhaus. These include an ashtray that resembles a halved metal ball, an edition of which is housed in MoMA’s collection, and a silver tea infuser and strainer, which was her first student design and today is owned by both the Met and the British Museum, among other institutions.

During her years at the Bauhaus, Brandt became one of Germany’s most celebrated industrial designers. And after Moholy-Nagy stepped down as head of the metal workshop in 1928, it was Brandt who replaced him, beating out her male counterparts for the position. During the same year, she developed one of the most commercially successful objects to come out of the school: the best-selling Kandem bedside table lamp. After leaving the Bauhaus in 1929, Brandt became director of the design department for the metalware company Ruppelwerk Metallwarenfabrik GmbH.

Arndt’s ambition was to become an architect, but it was only after she landed at the Bauhaus in 1923 that she realized architecture classes were not yet available at the school. She ended up crafting geometrically patterned rugs in the weaving workshop. One of these textiles famously decorated the floor of Bauhaus founder Walter Gropius’s office. But despite Arndt’s success at the loom, it was her photography practice, which she honed outside of the structured Bauhaus workshops, that would become most influential to modern and contemporary artists.

As a self-taught photographer, Arndt began by shooting the buildings and urban landscapes around her. She also assisted her husband’s architecture firm by photographing their construction sites and buildings. It was Arndt’s series of imaginative self-portraits titled “Mask Portraits,” however, that ultimately shaped her legacy. The series—which shows Arndt performing a range of traditional female roles, and wearing a profusion of veils, lace, and hats—is now seen as an important precursor to feminist artists like Cindy Sherman. 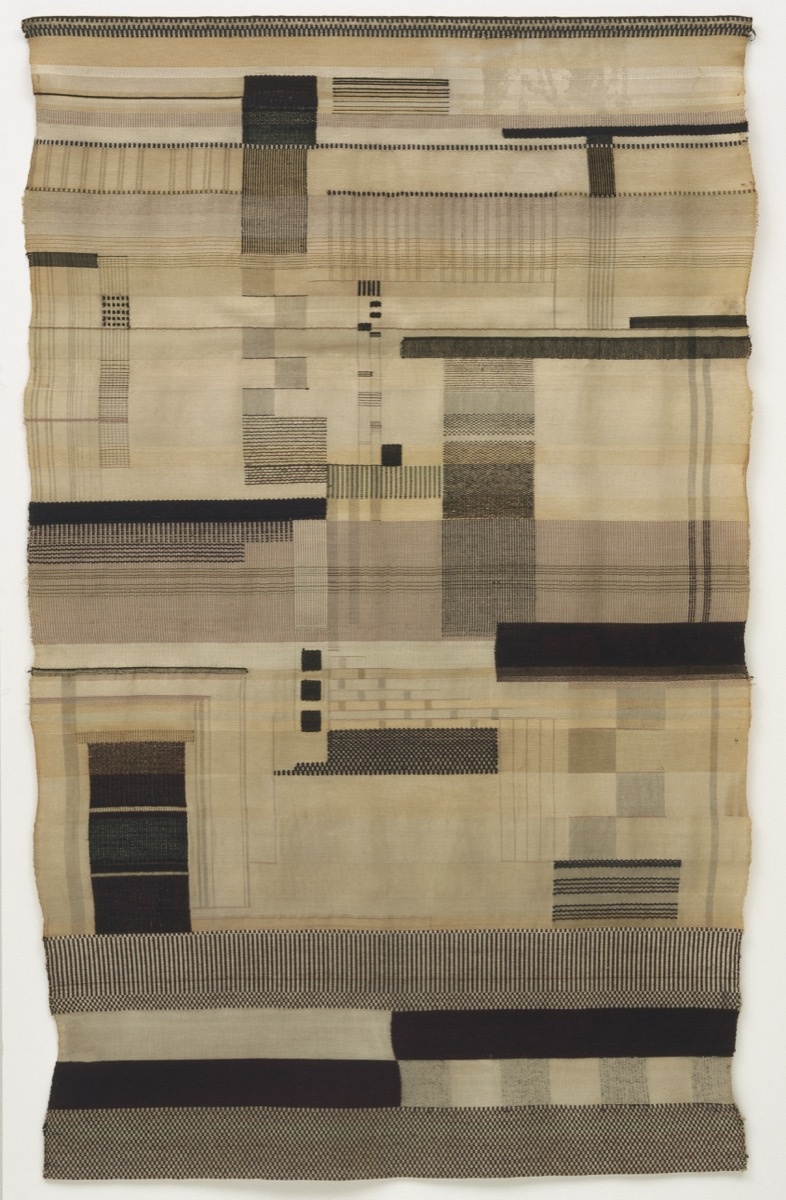 Stölzl was one of the earliest Bauhaus members, arriving at the school in 1919 at the age of 22. The same year, she penned confident diary entries that would foreshadow her success as a leading designer of the era. “Nothing hinders me in my outward life, I can shape it as I will,” one reads. “A new beginning. A new life begins,” goes another. While she experimented with a diverse range of disciplines at the Bauhaus, Stölzl focused on weaving, a department that she helmed from 1926 to 1931. There, she was known for complex patchworks of patterns, composed of undulating lines that melt into kaleidoscopic mosaics of colored squares. They took the form of rugs, wall tapestries, and coverings for Marcel Breuer’s chairs.

After being driven from Germany by the Nazi regime for marrying a Jewish man, fellow Bauhaus student Arieh Sharon, Stölzl established the hand-weaving company S-P-H-Stoffe in Zurich with former Bauhaus peers Gertrud Preiswerk and Heinrich-Otto Hürlimann. She ran the company until 1967 and designed countless popular carpets and woven textiles. “We wanted to create living things with contemporary relevance, suitable for a new style of life,” she once said. “It was essential to define our imaginary world, to shape our experiences through material, rhythm, proportion, color and form.”

Koch-Otte had already taught drawing and handicraft at a girls’ secondary school for five years before she joined the Bauhaus, shifting her focus to her own studies. There, with fellow weaver and painter Stölzl, Koch-Otte used textiles to explore new approaches to abstraction. To further develop their skills, the two also took classes at the nearby Dyeing Technical School and the Textile Technical School.

Koch-Otte married the director of the Bauhaus photography department, Heinrich Koch, in 1929. Together, they relocated to Prague when the Nazi regime rose to power. After her husband’s unexpected death, however, Koch-Otte returned to Germany. There, she became director of a textile mill, and continued to teach until the very end of her life—and her fabrics are still in production today.

Berger was one of the most creative members of the weaving workshop, with a more expressive and conceptual approach than that of many of her contemporaries. After Stölzl abdicated her seat as head of the department in 1931, Berger assumed the position and established her own curriculum, but remained there only until 1932, when she set out on her own.

Berger went on to open her own textile atelier in Berlin, and began the process of applying for a visa, with the goal of relocating to the U.S. There, she planned to join Moholy-Nagy’s New Bauhaus school in Chicago and escape Hitler’s regime (she was Jewish), but her application stalled. While waiting for approval, she returned to Croatia, where she was arrested by the Nazis and taken to Auschwitz. She died there in 1944, but her fabrics live on in collections from the Met to the Art Institute of Chicago.

Fehling had a natural talent for creating sculptural forms and theater designs, skills that she honed further while at the Bauhaus. There, she took classes with painter Paul Klee and sculptor Oskar Schlemmer, among others, between 1920 to 1923. Her objects and theater sets married whimsy and function; in 1922, she patented a rotating round stage for stick puppets.

After leaving the Bauhaus, she moved to Berlin and established a multifaceted freelance practice, splitting her time between concocting costume and stage designs and sculptures, the latter of which were celebrated in a solo show at Fritz Gurlitt Gallery in 1927. After studying in Rome in the early 1930s, Fehling returned to Germany, where her sculptures—forged in metal and stone and fusing cubism and corporeality—were deemed “degenerate.” She pushed on, continuing to develop her diverse oeuvre throughout her long life.

Siedhoff-Buscher was one of the Bauhaus’s few women to switch from the weaving workshop to the male-dominated wood-sculpture department. There, she invented a number of successful toy and furniture designs, including her “small ship-building game,” which remains in production today. The game manifested Bauhaus’s central tenets: its 22 blocks, forged in primary colors, could be constructed into the shape of a boat, but could also be rearranged to allow for creative experimentation. The toy could also be easily reproduced.

Siedhoff-Buscher also became known for the cut-out kits and coloring books she designed for publisher Verlag Otto Maier Ravensburg. But her most pioneering work proved to be the interior she designed for a children’s room at “Haus am Horn,” a home designed by Bauhaus members that exemplified the movement’s aesthetic. Siedhoff-Buscher filled it with modular, washable white furniture. She designed each piece to “grow” with the child: a puppet theater could be transformed into bookshelves, a changing table into a desk.

At just 21 years old, Heymann refused to follow the majority of her female peers into the Bauhaus’s weaving workshop, convincing Gropius to open up a place for her in ceramics. There, the young, free-thinking artist began to create angular objects, composed of triangles and circles and spangled with constructivist patterns and colorful glazes. She left just a year later, though, after butting heads with her teacher Gerhard Marcks.

Heymann and her husband went on to establish a workshop, Haël-Werkstätten, that produced her designs. They were a quick hit, selling at chic shops in Europe, Britain, and the U.S. alike, but Heymann was forced to sell the company in 1934. As European political conflict stirred, Heymann, who was Jewish, fled to England to escape persecution. There, she established a new company, Greta pottery, and would later devote her days to painting.

Like many of her Bauhaus contemporaries, Scheper-Berkenkamp was a passionate colorist, an interest she pushed in the school’s mural painting workshop, where she was one of only several women. Her work took her to Moscow with her husband, Bauhaus peer Hinnerk Scheper, where the couple established an “Advisory Centre for Colour in Architecture and the Cityscape,” and concocted color schemes for the exteriors and interiors of buildings across the Russian capital.

After the Bauhaus shuttered in 1933, Scheper-Berkenkamp worked as a freelance painter in Berlin and published a number of whimsical children’s books, coming-of-age narratives told through the lens of fantastical adventures. Tales like “The Stories of Jan and Jon and their Pilot Fish” (1947) are today considered part of the children’s book canon. They were some of the first to pair surrealistic drawings with outlandish plots; two of the books have recently been re-released by the Bauhaus Archive in Berlin.

After her husband’s death, Scheper-Berkenkamp took over his color design business, spearheading the schemes for Hans Scharoun’s Philharmonie building in Berlin, the Egyptian Museum in Berlin, and the Berlin Tegel airport building, among others.