by Sarah on February 7, 2014 in Cyndi Casemier Blog

Last night I forwarded part of Robert Genn’s newsletter about the color “red”.  This morning I was up to his comments about the color “Black”.  I am finding this information interesting.  You may already know it or had known it.  I thought I would forward it on. C2.

“Renoir declared, “I’ve been forty years discovering that the queen of all colours is black!” What he meant was that black works as a darkener because its near chromal neutrality does not sully the colour it grays. While scorned on a few snooty palettes, black is the loyal friend that helps make other colours look more brilliant than they are. Wise artists do not say derogatory things about black.

The essential blacks are lamp black, ivory black and Mars black. Lamp black is a pure carbon pigment made by burning oils and collecting the soot from flues. It’s one of the oldest manufactured pigments. Ivory black, originally made from burning real ivory, is now a bone byproduct of the slaughterhouse. Mars black, one of a pantheon of Mars colours, is an iron-oxide product that in many ways is more stable than the other blacks. It does not effloresce, maintains total integrity in oil and water-based media, and, to my knowledge, is the only paint that’s magnetic.

Black inks, Indian, Chinese, etc., are carbon derived and go back to the dawn of writing and drawing. Cuttlefish ink, used by the early Romans, is an impermanent anomaly. Japanese “Sumi” ink has a tradition of nuance and refinement. Ralph Mayer says, “The connoisseurship of sumi amounts to a cult.”

Give black a chance. A challenge is to work with only black and white for a day. After a week one begins to feel the brilliance of black. As seasoned artists have found out, if it works in black and white, it works.

Try the method of grisaille–a monochrome painting executed in shades of gray. Used as an under-painting, grisaille was first popularized by the Northern Renaissance artists. These days, using bright white grounds and a range of grays, full value can be had by glazing with acrylics or other media. In painting, black is mother of learning.” 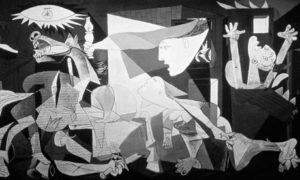